Mergers and Acquisitions in Banking and Finance 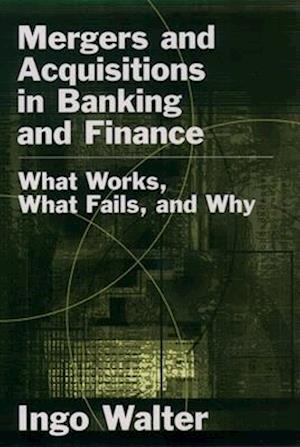 This book is intended to lay out, in a clear and intuitive as well as comprehensive way, what we know - or think we know - about mergers and acquisitions in the financial services sector. It evaluates their underlying drivers, factual evidence as to whether or not the basic economic concepts and strategic precepts are correct. It looks closely at the managerial dimensions in terms of the efficacy of merger implementation, notably the merger integration process. Thefocus is on enhancing shareholder value creation and the execution of strategies for the successful management of mergers. It also has a strong public-policy component in this "special" industry where successes can pay dividends and failures can cause serious problems that reach well beyond thefinancial services industry itself. The financial services sector is about halfway through one of the most dramatic periods of restructuring ever undergone by a major global industry. The impact of the restructuring has carried well beyond shareholders of the firms and involved into the domain of regulation and public policy as well as global competitive performance and economic growth. Financial services are a center of gravity of economic restructuring activity. M&A transactions in thefinancial sector comprise a surprisingly large share of the value of merger activity worldwide - including only deals valued in excess of $100 million, during the period 1985-2000 there were approximately 233,700 M&A transactions worldwide in all industries, for a total volume of $15.8 trillion. Of thistotal, there were 166,200 mergers in the financial services industry (49.7%), valued at $8.5 trillion (54%). In all of restructuring frenzy, the financial sector has probably had far more than its share of strategic transactions that have failed or performed far below potential because of mistakes in basic strategy or mistakes in post-merger integration. It has also had its share of rousing successes. This book considers the key managerial issues, focusing on M&A transactions as a key toolof business strategy - "doing the right thing" to augment shareholder value. But in addition, the degree of integration required and the historic development of integration capabilities on the part of the acquiring firm, disruptions in human resources and firm leadership, cultural issues, timeliness ofdecision-making and interface management have co-equal importance - "doing it right."