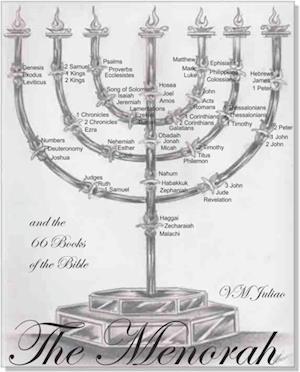 In this book we see how God concealed in the design of the tabernacle lampstand the 66 books of the Bible. Our Bibles were designed not by human volition but by divine intervention. Though man decided which books were to be included in what we call the Canon of Scripture, throughout this book we can see that God had already from beforehand ordained and predestined how many books would be included in the Bible and considered as 'Holy Writ'. Moses built the lampstand to the specific details that were shown to him by God on the mountain so that the lampstand could pre-figure the Bible with it's 66 books. The Menorah which is the Hebrew word for the lampstand is proof that God is the God who ordains the end from the beginning and that the men who put the Bible together were not acting on their own but were guided by God when they chose which books were to be included in the Bible and considered as sacred. In this book we look in detail the specifications of the lampstand that we find in the Scriptures and how God concealed the Bible with its 66 books in the design and construction of the Menorah.