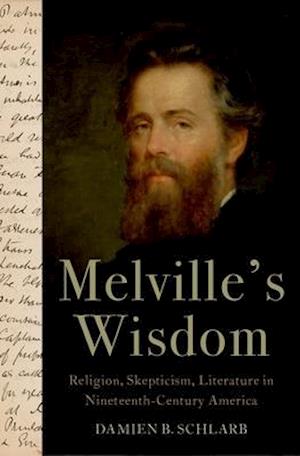 In Melville's Wisdom: Religion, Skepticism, Literature in Nineteenth-Century America, Damien B. Schlarb explores the manner in which Herman Melville responds to the spiritual crisis of modernity by using the language of the biblical Old Testament wisdom books to moderate contemporary discourses on religion, skepticism, and literature. Schlarb argues that attending to Melville's engagement with the wisdom books (Job, Proverbs, and Ecclesiastes) can help usunderstand a paradox at the heart of American modernity: the simultaneous displacement and affirmation of biblical language and religious culture. In wisdom, which addresses questions of theology, radical skepticism, and the nature of evil, Melville finds an ethos of critical inquiry that allows him to embracemodern analytical techniques, such as higher biblical criticism. In the medium of literature, he articulates a new way of accessing the Bible by marrying the moral and spiritual didacticism of its language with the intellectual distance afforded by critical reflection, a hallmark of modern intellectual style. Melville's Wisdom joins other works of post secular literary studies in challenging its own discipline's constitutive secularization narrative by rethinking modern, putatively secular cultural formations in terms of their reciprocity with religious concepts and texts. Schlarb foregrounds Melville's sustained, career-spanning concern with biblical wisdom, its formal properties, and its knowledge-creating potential. By excavating this project from his oeuvre, Melville's Wisdomshows how Melville celebrates intellectually rigorous, critical inquisitiveness, an attitude that we often associate with modernity but which Melville saw augured by the wisdom books. He finds in this attitude the means for avoiding the spiritually corrosive effects of skepticism.