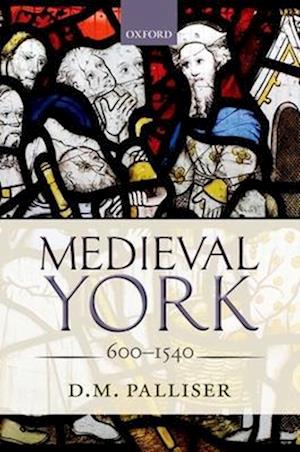 Medieval York provides a comprehensive history of what is now considered England's most famous surviving medieval city, covering nearly a thousand years. The volume examines York from its post-Roman revival as a town (c. 600) to the major changes of the 1530s and 1540s, which in many ways brought an end to the Middle Ages in England. York was one of the leading English towns after London, and in status almost always the 'second city'.Much research and publication has been carried out on various aspects of medieval York, but this volume seeks to cover the field in its entirety. David Palliser offers an up-to-date and broad-based account of the city by employing the evidence of written documents, archaeology (especially on the rich results of recent city centre excavations), urban morphology, numismatics, art, architecture, and literature. Special attention is paid to the city's religious drama and its wealth of survivingstained glass.The story of Medieval York is set in a wide context to make comparisons with other English and Continental towns, to establish how far York's story was distinctive or was typical of other English towns which have been less fortunate in the survival of their medieval fabric. It is essential reading for anyone interested in York's past and in its rich heritage of medieval churches, guildhalls, houses, streets, and city walls - the most complete medieval circuit in England.