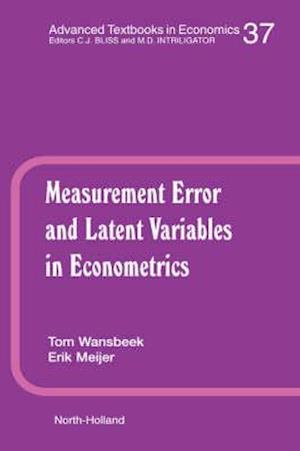 The book first discusses in depth various aspects of the well-known inconsistency that arises when explanatory variables in a linear regression model are measured with error. Despite this inconsistency, the region where the true regression coeffecients lies can sometimes be characterized in a useful way, especially when bounds are known on the measurement error variance but also when such information is absent. Wage discrimination with imperfect productivity measurement is discussed as an important special case. Next, it is shown that the inconsistency is not accidental but fundamental. Due to an identification problem, no consistent estimators may exist at all. Additional information is desirable. This information can be of various types. One type is exact prior knowledge about functions of the parameters. This leads to the CALS estimator. Another major type is in the form of instrumental variables. Many aspects of this are discussed, including heteroskedasticity, combination of data from different sources, construction of instruments from the available data, and the LIML estimator, which is especially relevant when the instruments are weak. The scope is then widened to an embedding of the regression equation with measurement error in a multiple equations setting, leading to the exploratory factor analysis (EFA) model. This marks the step from measurement error to latent variables. Estimation of the EFA model leads to an eigenvalue problem. A variety of models is reviewed that involve eignevalue problems as their common characteristic. EFA is extended to confirmatory factor analysis (CFA) by including restrictions on the parameters of the factor analysis model, and next by relating the factors to background variables. These models are all structural equation models (SEMs), a very general and important class of models, with the LISREL model as its best-known representation, encompassing almost all linear equation systems with latent variables. Estimation of SEMs can be viewed as an application of the generalized method of moments (GMM). GMM in general and for SEM in particular is discussed at great length, including the generality of GMM, optimal weighting, conditional moments, continuous updating, simulation estimation, the link with the method of maximum likelihood, and in particular testing and model evaluation for GMM. The discussion concludes with nonlinear models. The emphasis is on polynomial models and models that are nonlinear due to a filter on the dependent variables, like discrete choice models or models with ordered categorical variables.