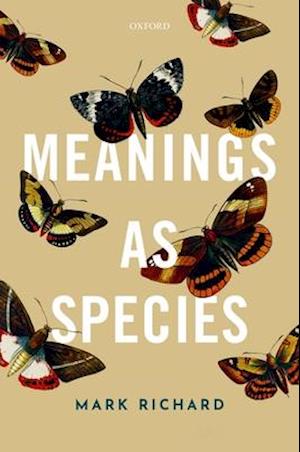 Mark Richard presents an original picture of meaning according to which a word's meaning is analogous to the biological lineages we call species. His primary thesis is that a word's meaning - in the sense of what one needs to track in order to be a competent speaker - is the collection of assumptions its users make in using it and expect their hearers to recognize as being made. Meaning is something that is spread across a population, inherited by each new generationof speakers from the last, and typically evolving in so far as what constitutes a meaning changes in virtue of the interactions of speakers with their (linguistic and social) environment. Meanings as Species develops and defends the analogy between the biological and the linguistic, and includes adiscussion of the senses in which the processes of meaning change are and are not like evolution via natural selection. Richard argues that thinking of meanings as species supports Quine's insights about analyticity without rendering talk about meaning theoretically useless. He also discusses the relations between meaning as what the competent speaker knows about her language, meaning as the determinant of reference and truth conditions, and meaning qua what determines what sentenceuses say. This book contains insightful discussions of a wide range of topics in the philosophy of language, including: relations between meaning and philosophical analysis, the project of 'conceptual engineering', the senses in which meaning is and is not compositional, the degree to which to which referentialmeaning is indeterminate, and what such indeterminacy might tells us about propositional attitudes like belief and assertion.

Forfattere
Bibliotekernes beskrivelse Mark Richard presents an original theory of meaning, as the collection of assumptions speakers make in using it and expect their hearers to recognize as being made. Meaning is spread across a population, inherited by each new generation of speakers from the last, and evolving through the interactions of speakers with their environment.