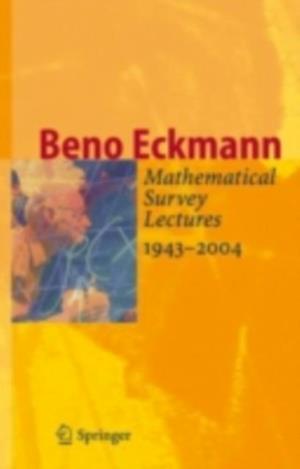 In my long professional life as a mathematician I have had to deliver various survey lectures. They were of different character according to the occasion. A selected number are reproduced in this volume. They were, with few exceptions, printed in books or in periodicals, and are reproduced here without any modification. I started as a student at the ETH Zurich in 1935 and have spent my working Ufe there, with the exception of the period 1942-1948 (lecturer then associate professor at the University of Lausanne) and 1947 and 1951/52 (Institute for Advanced Study Princeton). In 1948 I was appointed as a professor at the ETH; I retired in 1984 and have since then been professor emeritus. The surveys in this volume are lectures given at congresses and workshops, at international congresses of mathematicians (plenary or section lectures), and at special occasions like birthdays or commemorations. They all reflect the special interests of the respective times. Although they are in fields of topology, algebra and differential geometry they reveal the big changes mathematics has undergone over the years from 1943 to 2004. New thinking has been developed; it has created new problems, or simply has let old problems appear in a new light.