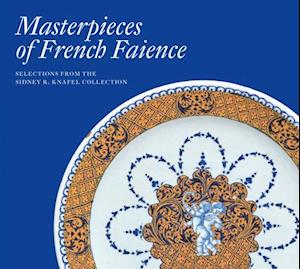 Encompasses an impressive and engaging variety of fabulous objects from the most important faience centres, dating from the late sixteenth to the mid-eighteenth century. A feat of great technical achievement, French faience was introduced to Lyon in the second half of the sixteenth century by skilled Italian immigrants:mdash;the French word "faience" deriving from the northern Italian city of Faenza. Over the next two centuries, production spread throughout the provinces of metropolitan France. The fine decoration of French faience draws inspiration from multiple sources - Italian maiolica, Asian porcelain, and even contemporary engravings. The forms of its platters, bowls, plates, and ewers derive mostly from European ceramics and silver. This complex interplay of influences comes together in works of great originality. The Knafel Collection of French faience, the finest in private hands, includes outstanding examples of Nevers, Rouen, Moustiers, Moulins, and Marseilles production from the late sixteenth to the mid-eighteenth century. The quality of these masterpieces almost obscures the fact that French faience was essentially a provincial art, largely patronised and commissioned by a local aristocracy and made far from the centres of political power in Versailles and Paris. In this stunning new volume, Charlotte Vignon traces the history of French faience, offering detailed discussions of key centers of production. Illustrated with more than seventy examples, this valuable resource testifies to the creativity and beauty of an engagingly innovative tradition. AUTHOR: Charlotte Vignon is curator of Decorative Arts at The Frick Collection, as well as a Visiting Associate Professor at the Bard Graduate Center, New York. 88 colour images