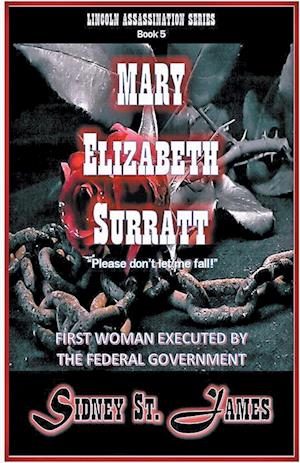 The trial of Mary Elizabeth Jenkins Surratt in the assassination of Abraham Lincoln at the end of the Civil War after Robert E. Lee's surrender, came to a dramatic conclusion on July 7, 1865. Andrew Johnson did not declare, however, an end to the War Between the States until August 1866.

In 1851, Mary Jenkins Surratt and her husband John stood outside their home and watched as it burned to the ground in Maryland. They elected not to rebuild the home, and, instead, built a home in combination with a tavern for weary travelers to partake in drink, near Mary's parent's place, a small area called Surrattsville.

John Surratt, Sr. died in 1862. Mary moved with her daughter Anna in 1864 to their Washington City location she and John purchased in 1853. This location plays a vital role in the many meetings held by Booth, John Surratt, Jr., and others.

On April 11th, Mary traveled with Louis Weichmann to her tavern in Surrattsville she had leased to John Lloyd. They passed Lloyd on the road to Uniontown, and from testimony given by Louis Weichmann, Mary told Lloyd the "shooting irons" would be needed soon. This was associated with other testimony given in the trial about rifles that were hidden at the tavern by some Booth conspirators.

The fifth book in this series will allow the reader to determine for themselves if, in fact, Mary Surratt should have received the penalty handed down to her at the completion of the trial. In numerous novels on this subject, some say Mary Surratt is guilty as sin. Many say Mary Surratt was only in the wrong place at the wrong time, and it was the United States Government out for revenge… out for blood.

In the trial of Mary Elizabeth Jenkins Surratt, a military tribunal, rather than a civilian court, was chosen as the prosecutorial venue. Why? Because the government officials at the time thought it might be more lenient in regards to the evidence allowing the court to get to the bottom of what they perceived as a vast conspiracy.

From all indications, enough preliminary witnesses mentioned Mary Surratt's participation as responsible for providing the nest that hatched the egg, her boarding house in Washington City.

One thing in the proceedings that appeared suspicious was on the night she was arrested, she denied having ever seen Lewis Thornton Powell when he appeared at her boarding house. According to numerous witnesses in the trial, Lewis had been there on multiple occasions to meet with her son and others. Was Mary lying, or was it just too dark when she was asked if she recognized him in front of the boarding house.

Mary Surratt was on trial with seven men. Her attorneys were John Clampitt and Frederick Aiken. In prison, Lewis Powell continued to tell anyone who would listen that keeping Mary shackled and in prison was wrong as she had nothing to do with the assassination of the President.

Testimony given by John Lloyd and Louis Weichmann weighed heavily in the Military Commission's final decision.

During the trial, Mary dressed in total black. Her head was covered in a black bonnet. The expressions on her face were barely recognizable hidden behind the netting of her silk veil.

This court case, in its entirety for Mary Surratt, is depicted in this novel, the fifth novel in the Lincoln Assassination Series.  The reader will have the opportunity to determine from the evidence and the testimony of the witnesses whether or not Mary Elizabeth Surratt should be hung or be turned free.