Marx, Veblen, and the Foundations of Heterodox Economics 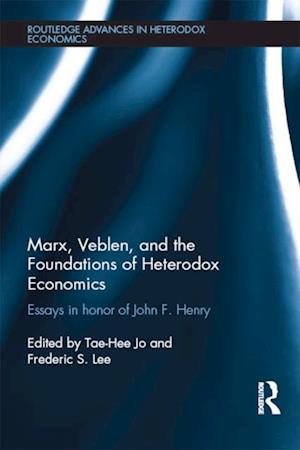 John F. Henry is an eminent economist who has made important contributions to heterodox economics drawing on Adam Smith, Karl Marx, Thorstein Veblen, and John Maynard Keynes. His historical approach offers radical insights into the evolution of ideas (ideologies and theories) giving rise to and/or induced by the changes in capitalist society. Essays collected in this festschrift not only evaluate John Henry's contributions in connection to Marx's and Veblen's theories, but also apply them to the socio-economic issues in the 21st century. In Part I leading heterodox economists in the traditions of Marxism, Post Keynesianism, and Institutionalism critically examine Marx's and Veblen's theoretical frameworks (and their connections to each other) that have become the foundations of heterodox economics. Chapters in Part II showcase alternative theoretical explanations inspired by Marx, Veblen, and Henry. Topics in this Part include financial crisis, financialization, capital accumulation, economics teaching, and the historical relationship between money and class society. Part III is devoted to John Henry's heterodox economics encapsulated in his 'farewell' lecture, interview, and bibliography. Essays in this book, individually and collectively, make an important point that the history of economic thought (or historical analysis of economic theory and policy) is an integral part of developing heterodox economics as an alternative theoretical framework. Anyone who is troubled by the recurring failure of capitalism as well as mainstream economics will find this book well worth reading.