Martin Parr: From the Pope to a Flat White (Limited edition) 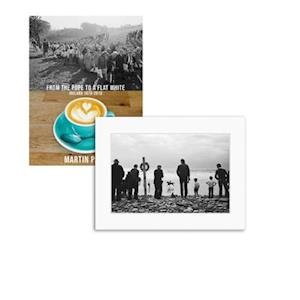 This special edition limited to 70 copies includes the book and one gelatin silver print signed and numbered by Parr. The picture is titled Glenbeigh Races, County Kerry, 1983. The print measures 20.0 x 29.0cm Martin Parr has been taking photographs in Ireland for 40 years. His work covers many of the most significant moments in Ireland's recent history, encompassing the Pope's visit in 1979, when a third of the country's population attended Mass in Knock and Phoenix Park in Dublin, as well as gay weddings and start-up companies in 2019. It is difficult to think of country that has changed so dramatically in this relatively short space of time. Parr lived in the West of Ireland between 1980-82. He photographed traditional aspects of rural life such as horse fairs and dances, but also looked at the first hint of Ireland's new wealth in the shape of the bungalows that were springing up everywhere, replacing more traditional dwellings. During subsequent trips to Ireland he explored the new estates around Dublin and the introduction of the first drive-through McDonald's. Parr also looked at the North and documented how, after the Good Friday agreement, the Troubles became the focus of a new tourist boom. The final chapter of this book portrays a contemporary Dublin where start-up companies are thriving, the docks area is being gentrified and where icons of wealth and modernity - such as the flat white - can be everywhere. Ireland has also now voted to allow both abortion and gay weddings, developments that would have been unthinkable 40 years ago. The book includes an introduction by the acclaimed journalist Fintan O'Toole.