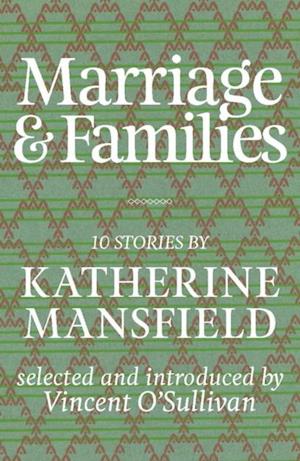 Ten stories from the 'brilliant' Katherine Mansfield on the theme of marriage and family. As Vincent O'Sullivan states, those encountering Mansfield's stories for the first time have invariably found they 'were alive, they were witty, they were moving, they covered new ground'. But with about 70 stories to choose from and a vast array of themes and approaches, where do you start, and how do you begin to understand and best appreciate her writing and achievements? This series features selections of her best stories, grouped by subject and introduced by Mansfield scholar Vincent O'Sullivan, who is also a writer of fiction in his own right. Each volume offers a different way to view Mansfield's work. This selection brings together her most celebrated stories on marriage and families. As O'Sullivan explains, his choices cover 'everything of importance that happened to her, that she observed and experienced, between childhood in Wellington's wooden houses, to her deciding in Switzerland in July 1922, that her final paragraph about a singing bird was the place for her to stop'. Other titles in the MANSFIELD SELECTIONS series:In Bavaria: ISBN 978-1-77553-498-3New Zealand Stories: ISBN 978-1-77553-500-3Sex & Lies: ISBN 978-1-77553-499-0Women Alone: ISBN 978-1-77553-502-7