- A Political Economy of Russia from the 10th Century to 2008

indgår i serie The Locke Institute 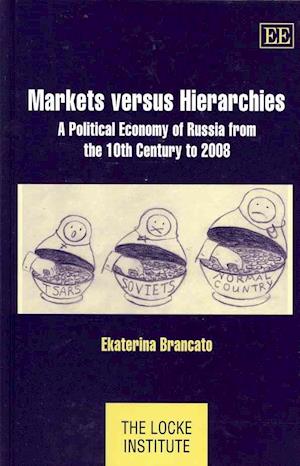 This unique book uses a transaction cost perspective to illustrate how hierarchies influenced the structure of markets and behaviour of individual businesses and cartels in pre-revolutionary, Soviet and present-day Russia. Ekaterina Brancato exposes the devastating effects of self-interested decision-making of government officials on economic growth, and highlights the inefficiencies of the legal system in Russia. She demonstrates that throughout Russian history considerable state involvement in the economy has meant that some markets were highly regulated; for most of the 20th century, open markets were suppressed by the political regime, and entrepreneurial success has been dependent on networking. The general population, the author argues, has exhibited an inadequate propensity to self-govern. In addition, the laws of contract and private property, crucial for development of markets, have been ineffective. The book concludes that, consequently, the cost of market transactions has been high and the cost of social networking through hierarchies relatively low.This book will strongly appeal to academics and students specializing in industrial organization, public choice, transition, entrepreneurship, social networks and cultural studies as well as Russian economic history and political economy. Business and management students focusing on transition economies will also find this book to be of particular interest.