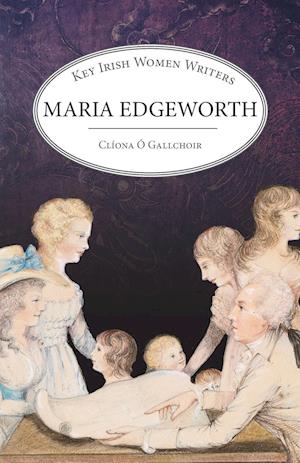 This new book offers a critical introduction to the full scope of Edgeworth's writing, encompassing her whole career and a broad range of her extensive oeuvre. / Maria Edgeworth made a significant contribution to three different but interlinked areas: education, the representation of Ireland, and the representation of women's experiences and characters. Cl ona Gallchoir provides a lucid and accessible introduction to each area of Edgeworth's work - and offers students in particular an overview of her work that encompasses its full range and incorporates the insights of contemporary criticism. / Particular focus is given to her Irish fiction, her examination of women's lives and roles, and her work in education and children's literature. An introductory chapter outlines the key historical and cultural contexts as well as establishing the central intellectual questions with which Edgeworth engaged, and which offer threads of continuity in a diverse body of work. / This work draws on recent research that has highlighted some of the lesser-known works, while also presenting discussions of the major works in the light of the most recent criticism. / Maria Edgeworth (1767-849) was born in England but moved with her father to the family estate at Edgeworthstown, Co. Longford in 1782. Her early writings led to The Parent's Assistant (1796), a series of didactic stories for children, and Practical Education (2 vols. 1798), influenced by the ideas of Jean-Jacques Rousseau. A further series of her works, some of them collaborative, followed. In 1800 Maria famously published Castle Rackrent, the earliest regional novel in English. This influenced Sir Walter Scott, which he praised in his preface to Waverley (1814). A number of other major works followed. / The year 2018 was the 250th anniversary of her birth, and witnessed a range of events that give evidence of ever-increasing scholarly and critical interest in her work. The past 20 years has seen a new 12-volume scholarly edition, numerous paperback editions, several monographs devoted in whole or in part to her work, 2 essay collections, and a host of journal articles. Her work is included on courses on Irish literature, women's writing, and romantic-period literature, including drama, and it is studied from many different perspectives (e.g. women and enlightenment, the development of the novel, literature and colonialism, children's literature). / The content is ordered chronologically. A conclusion draws together the central discursive strands and offers an assessment of Edgeworth's achievement and reputation. Contents: Biographical Timeline. / 1. Introduction: Themes and Contexts. / 2. Education, 1795-1804 (Practical Education, Parent's Assistant, Early Lessons, Moral Tales, Harry and Lucy). / 3. Ireland, 1782-1802 (The Double Disguise, Castle Rackrent, An Essay on Irish Bulls). / 4. Women, 1795-1806: (Letters for Literary Ladies, Belinda, Leonora). / 5. Novelist of the Union: Ennui, The Absentee and Ormond. / 6. Challenging English Identity: Harrington, Patronage. / 7. Later Work: Helen and later fiction for children. / Conclusion. Notes. Bibliography