Mann and Proctor on the Law of Money 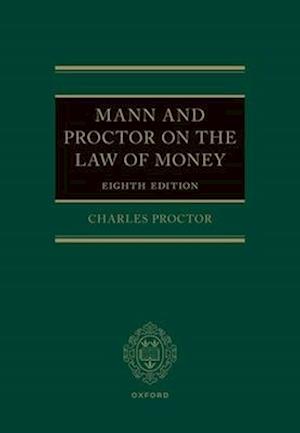 Providing a thorough legal analysis of money in all its aspects, Mann on the Legal Aspect of Money has been the leading text on the private and public law of money ever since the publication of the first edition in 1939. This latest edition of considers new issues that have had a significant impact on monetary law, such as Brexit, virtual currencies, and the continuing shadow of 'currency wars'. The text also includes new material on central banks and their role in currency and financial stability. The book deals with the developments and legal challenges of digital money, providing a detailed evaluation of the status of Bitcoin as money. The text investigates the challenges that virtual currencies like Bitcoin pose to our fundamental assumptions about monetary institutions and to our understanding and definition of money. In an EU context, the new edition reflects on the legal aspects of the Greek financial crisis, with an updated look at the role of the IMF and the ECB. The eighth edition also inclusions analysis of the implications of Brexit, developments in damages and interest following on from the Sempra Metals case, the legal definition of a monetary union in Europe, and the conflict of anti-terrorist sanctions blocking financial resources. Altogether, this provides an up-to-date and detailed discussion of current matters, whilst continuing to provide an in-depth analysis on all aspects of monetary law in a single reference source.

Forfattere
Bibliotekernes beskrivelse The eighth edition of this leading work on all private and public law aspects relating to money has been thoroughly revised to include consideration of the impact of Brexit, virtual currencies and also includes new materials on the role of central banks.