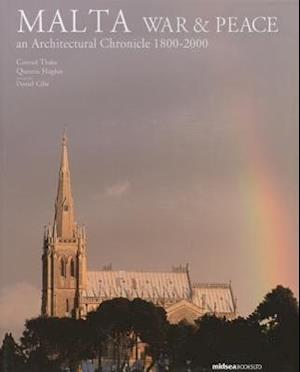 A comprehensive survey of Maltas architecture in the last 200 years. This new book follows logically from the definitive initial publication by Dr Quentin Hughes and Dr Conrad Thake, 'Malta: The Baroque Island' which surveyed the buildings from the Mannerist and Baroque periods (1530-1798) which adorn the Islands. Malta: War and Peace is different and takes up the story of the more recent architectural heritage, bringing its history up to the millennium in the form of a colourful gazetteer. Once again the outstanding photographs taken by Daniel Cilia embellish a publication that documents and does justice to the richness of the architecture of the post-Renaissance Modern period. His pictures build on the entrancing effects of light found on the islands during summer reflecting in their sharpness and immediacy the warmth of the sun and the profiles of shadow-filled facades. Thus, the two separate publications can be seen as complementary, bringing heritage history together in a rich and formidably diverse array of examples. They depict an island that one commentator claimed has more buildings and monuments per square kilometre than that in any other other part of Europe! This book inevitably as its title suggests charts the history of the evolution of military structures underlining the awful tremors of conflict and wars that have besieged the islands over the past two hundred years. The new book is organized into building types which conveniently coincide with historical periods. They range from the early military naval Hospital at Bighi, now serving in part as the headquarters for the Malta Centre for Restoration and upon the initiative of Edward de Bono as a World Centre for New Thinking. The hospital complex was rebuilt and restored but it still dominates the Grand Harbour environs and alerts every visitor to its strong gaunt colonial Neo-Classical style. There are very few examples of what one might call Modern Movement (MoMo) architecture of the interwar period. The post-war period is different and productively rich with examples of work that clearly have a shared relationship with modernism and the various international movements and ideas current in other parts of the world. The collective work of local architects has made the Islands look as they do. Their buildings indicate the depth of local talent and a good selection is to be found in the closing section of this welcome and comprehensive gazetteer.

Forfattere
Bibliotekernes beskrivelse A comprehensive survey of Maltas architecture in the last 200 years. This new book follows logically from the definitive initial publication by Dr Quentin Hughes and Dr Conrad Thake, 'Malta: The Baroque Island' which surveyed the buildings from the Mannerist and Baroque periods (1530-1798) which adorn the Islands. Illus.