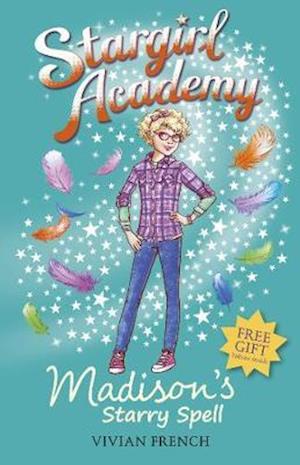 The girls in Team Starlight learn spells and earn their stars in this magical new young fiction series!Welcome to Stargirl Academy, the magical school in the clouds! Previously a rather old-fashioned establishment, it has been reopened by its head teacher to train children to be modern day fairy godmothers. Fairy Mary McBee selects a group of girls: Lily, Ava, Madison, Sophie, Emma, Olivia - and Melody and Jackson who think they're better than everyone else. The girls learn lots of spells - shimmering, starry, shining, sparkling, glittering and twinkling ones - which they use to fix problems and help people in trouble. For every successful mission they gain a star, and once they have six stars they will be fully qualified stargirls! Madison leads the second mission and chooses to help her sister Izzy's friend Di who says her mother is very ill. Izzy has been behaving really weirdly since she started her new school and it turns out it's because Di is bullying her. With some magical intervention in the form of a starry spell, the girls discover the truth about Di - and once everything comes out the two girls become firm friends!