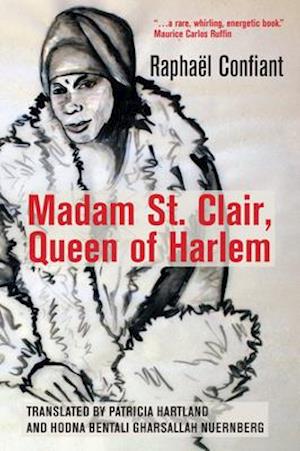 Fiction. African & African American Studies. Latinx Studies. Women's Studies. Translated by Patricia Hartland and Hodna Bentali Gharsallah Nuernberg. MADAM ST. CLAIR, QUEEN OF HARLEM is the story of a real-life woman's rise from the slums of Martinique to the heights of Sugar Hill during the Harlem Renaissance. In the years following her arrival on Ellis Island with little more than a razor and a slim roll of bank notes, St. Clair would become queen of the numbers game, facing off against both the black underworld and the white mafia. Traversing the era from the First World War, Prohibition, the Great Depression, the Second World War and the beginning of the Civil Rights Movement, she became an iconic figure of the Harlem Renaissance, as a ruthless lady gangster but also as consort and benefactor to such heroes of the movement as W.E.B. Du Bois, Countee Cullen, and Langston Hughes. "MADAM ST. CLAIR, QUEEN OF HARLEM pulls you into the life of an unforgettable woman, who will capture your imagination. This is a rare, whirling, energetic book.��Maurice Carlos Ruffin