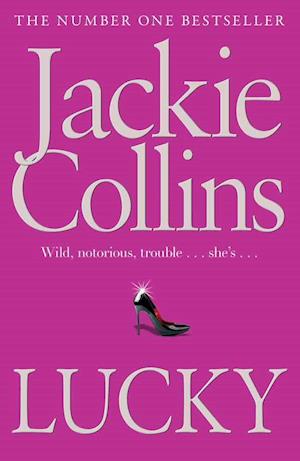 With the sensual grace of a panther, Lucky Santangelo prowled her Las Vegas casino, restless, ready, eager for action. That night began a dazzling odyssey, filled with dangerous passion and sun-drenched sex, sadistic vengeance and breathless suspense. From the decadent luxury of California, to Paris, New York and a private Greek island, Lucky fought for her father's honour, for ruthless triumph, for the wild card of a fabulous love. Her rivals; an ice-cold Hollywood wife...a much-married heiress strung out on cocaine...a jaded magnate hooked on power...a crazed hoodlum lusting for murder. But Lucky was a gambIer and a lover, a woman who ruled her empire and pursued her man with the potent Santangelo strength ... her way, on her terms, whatever the odds. Jackie Collins tops the sensational success of Hollywood Wivesand Chanceswith Lucky, "so hot it will have to be printed on asbestos."

Forfattere
Bibliotekernes beskrivelse Lucky Santangelo is back - in a tale of power, passion, revenge and raging family dynamics