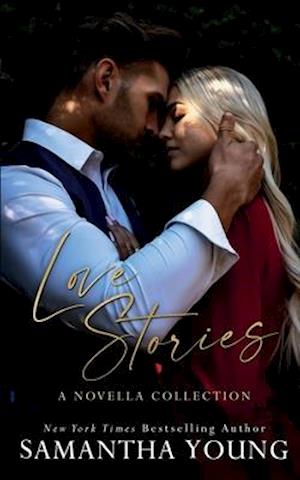 This volume includes novellas previously only available exclusively to newsletter subscribers. They have now been collated into this romantic collection of modern love stories.

It's Christmas at Shaw's Department store in Edinburgh! Reid Shaw should feel nothing but gratified by his success. But he's not satisfied because the sexy Scot wants forbidden fruit for Christmas: Evan Munro. Reid's Evan's boss. He's thirteen years older than her.

After Ryan drunkenly kisses the object of her crush, Joe-her sister's father-in-law- at his son's birthday party, all she wants to do is avoid Joe for the rest of eternity. But when they find themselves stranded alone together on New Year's Eve, Ryan discovers Joe most definitely doesn't want to avoid Ryan...

Micah Green has loved Valentine Fairchild for over ten years; ever since they were kids brought together by Micah's difficult family life. Too many outside factors have gotten in their way, pushing them further apart over the years. But Micah, no matter how hard he tries, can't forget her. When he finds a way to see her again, he realizes he's wasted too much time loving Valentine from afar. Now he just has to convince her to let go of their past so they can move on with their future. Together.

Ember in the Heart:

When Ember Bonet overhears her sister's fiancé's best friend uttering rude remarks about the Bonet sisters at the engagement party, she instantly dismisses him as a pretentious man-child. Then said man-child, Foster Darwin, moves into the house next door along with his five-year-old daughter, making him hard to ignore.

Determined to keep her distance from Foster, Ember fails when it becomes clear he and Georgie need support in their new life together. Proximity to one another is too great a temptation, and physical chemistry soon turns into so much more. If only Ember could get over their age difference and Foster his family pride...

When Boston's favorite weather girl is blackmailed by her boss into investigating billionaire Caine Carraway, Nadia Ray is thrown into the path of his best friend Henry Lexington. Villain is an enemies-to-lovers companion novella to the New York Times bestselling romance Hero.

One Day: A Valentine Novella

Hazel Benny hates Valentine's Day and has every reason to. This year she decides to run from the dreaded day to the Scottish Highlands. However, she never expected to get caught in the woods with her pants down by American Liam Brody or that in meeting him, her entire life could change in just one day...