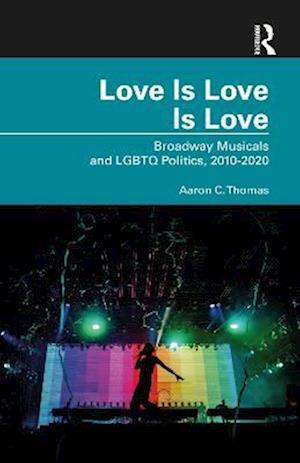 The politics of Broadway musicals matter a great deal more to U.S. American culture than they appear to mean, and they are especially important to mainstream politics surrounding sex, gender, and sexuality. Love Is Love Is Love looks to the Broadway musicals of the past decade for help understanding the current state of LGBTQ politics in the United States. Through analyses of Promises, Promises, Newsies, Hedwig and the Angry Inch, The Color Purple, and Frozen, this book attempts to move past the question of representational politics and asks us instead to think in more complex ways about LGBTQ identity, what LGBTQ politics are, and the politics of Broadway musicals themselves. Producing new, complex readings of all five of these musicals, author Aaron C. Thomas places each of them within the context of the LGBTQ politics of their day. Some of the issues the book treats are controversies of casting, the closetedness and openness of musical theatre, LGBTQ identities, adaptation from movies into musicals, and the special power of the musical form by examining how these shows differ from the books and movies on which they're based. Love Is Love Is Love places contemporary LGBTQ political tensions and conversations in a new light, making this an essential companion for students and scholars of contemporary theatre, musical theatre, cultural studies, Queer studies, and gender studies.