Lonergan's Quest: A Study of Desire in the Authoring of Insight 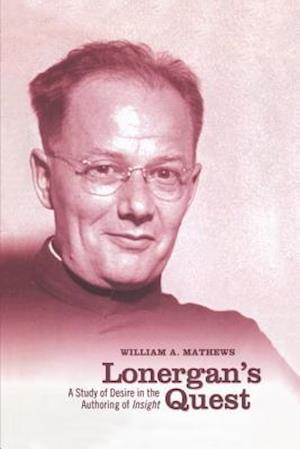 Insight is widely regarded as Bernard Lonergan’s masterwork. Worked out over a period of twenty-eight years, its aim was to present a theory of human knowing that underpinned the wide range of disciplines it addressed and their distinctive insights. In Lonergan’s Quest, William A. Mathews details the genesis, researching, composition, and question structure of Insight.

The path to Insight began for Lonergan in the 1920s with his studies in philosophy at Heythrop College. Questioning many of the accepted truths of those studies, Lonergan's interests moved to economics while teaching in Depression-era Montreal, and later to theology and the philosophy of history while studying in Rome. The writing of Insight began in earnest in 1949 and soon evolved into Lonergan’s masterpiece, encompassing his many divergent, but philosophically coherent, streams of thought.

An intellectual biography, Lonergan’s Quest locates Insight centrally within the broader philosophical tradition, presenting a new solution to the problem of the mind-world relation as posed by Immanuel Kant, as well as addressing the nature of consciousness. The book demonstrates that the desire of the human mind is also a narrative in time through which the intellectual identity of the author is forged and their relation with the text established.