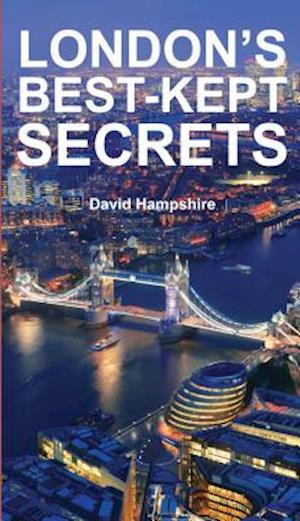 London is one of the world's leading touristdestinations, with a wealth of world-class attractions - more than any othercity in the world - which draw millions of visitors a year, including amazingmuseums and galleries, beautiful parks and gardens, glorious churches andcathedrals, stunning palaces and grand houses, and much, much more. These arecovered in numerous excellent tourist guides and need no introduction here.What aren't so well known are London's numerous smaller - but no less interesting- attractions, most of which are largely neglected by visitors and Londonersalike. Whatour London's Secrets series of books does is take you off the beaten path -side-stepping the city's tourist-clogged major sights - to seek out itslesser-known, more off-beat and mysterious side. London's Best-Kept Secretsbrings together the very best attractions - the 'greatest hits' - that we have discoveredover the last five years. It includes some of the city's loveliest hiddengardens and parks, absorbing and poignant small museums, great art andarchitecture, beautiful ancient buildings, magnificent Victorian cemeteries,historic pubs, fascinating markets and much more.Entriesrange from the enchanting Hill Garden to the magical canals of Little Venice,from the home of Britain's greatest naturalist to Dennis Severs' haunting home,from the moving Foundling Museum to the birthplace of Big Ben (and the Liberty Bell),the splendor of some of Wren's greatest churches to a lovely house designed byWilliam Morris, and from the spectacular treasures of Syon House to atmosphericKensal Green cemetery. London'sBest-Kept Secrets isn't intended as a walking guide, although many of theplaces covered are close to one another, particularly in central London and theCity, where you can easily stroll between them, while some are situated in thesuburbs. However, most are close to public transport links and relatively easyto get to. What's more the vast majority are free, so there's no excuse for notgetting out there and exploring. Witha copy of London's Best-Kept Secrets to hand to inspire you, you need never bebored of London (or life). We hope you enjoy discovering the city's hiddensecrets as much as we did.

Forfattere
Bibliotekernes beskrivelse London Best-Kept Secrets brings together the 'greatest hits' from our London's Secrets series. We take you off the beaten tourist path to seek out the more unusual ('hidden') places that often fail to register on the radar of both visitors and residents alike. 500 colour illustrations, 10 maps