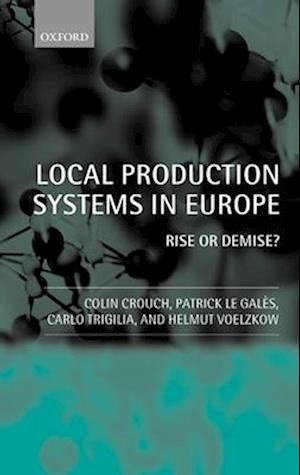 This is the first book to present a systematic analysis of specialized clusters of small manufacturing enterprises in the main European economies. Combining knowledge from case-study literature with original analyses of statistical data enables the authors to present full accounts of the role of these clusters in Britain, France, Germany, and Italy, showing the considerable diversity of forms they take.Local production systems (as these clusters are termed) are seen to exist where there are either particular competitive advantages for participation by clusters of small and medium-sized, as opposed to large, firms, or where such clusters at least stand as good a chance as large firms. Small firms may work through a diversity of forms of governance: certain forms of market; cooperation among themselves; through associations; with larger firms located in the same area; or by making use of localfacilities provided by governmental or other external agencies - or a combination of all five.The introduction shows how previous literature has been divided into two strands. First came optimistic, mainly 1980s, writings, which assumed that the search for flexibility and quality, typical of post-Fordist models of economic organization, would enhance the role of SMEs. In the ensuing decade, a more pessimistic analysis was put forward. It was argued that the increasing globalization of the economy would bring about a demise of local production systems, under pressure from new globallarge firms. The authors discuss the possibility of more nuanced findings, and propose a combination of the literature on local production systems with theories of economic governance to assist this process.There follows a chapter which surveys overall economic development in the four countries, concentrating on local economies. Then four national surveys take up the theme of the governance of local production systems in Italy, Germany, France, and Britain. A concluding chapter identifies a diversity of forms of clusters of small firms, and on that basis develops a sociological critique of current neo-institutionalist theories of markets.Local production systems are found to be growing, not declining, in importance, as they facilitate the circulation of tacit knowledge - a precious resource in all sectors which depend on both constant innovation and the flexibility of small enterprises. However, the most rapidly growing form of these systems is that where groups of small suppliers depend on a major customer firm - a form that in the long run might undermine the autonomous capacities of local small-firm systems.

Forfattere
Bibliotekernes beskrivelse A systematic analysis of specialized clusters of small manufacturing enterprises in the main European economies. Combining case-study literature with analyses of statistical data enables the authors to show the role of these "clusters" and the considerable diversity of forms they take. 22 black and white figures, numerous tables