Local Politics: A Resource for Democracy in Western Europe

indgår i serie New Directions in Culture and Governance 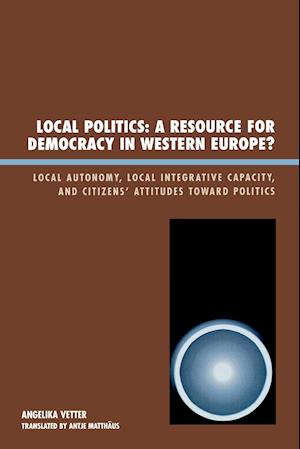 Local Politics: A Resource for Democracy in Western Europe examines the relationship between local institutional design and citizens' attitudes toward democracy. Translated by Angelika Vetter, this book is a unique contribution to traditional political culture research, which has focused primarily on national politics. As the last stage in the nation-state administrative apparatus, local authorities represent the synapse between the political-administrative system and the citizens. By comparing attitudes towards local and national politics in a cross-national framework, this book investigates the socialization functions of local politics including the feeling of identification or belonging, the input side of politics, and the citizens' satisfaction with local and national democracy. Following sophisticated analysis, Vetter highlights the conditions under which locally socialized political orientations may serve as a resource for democracy at higher system levels. Local Politics: A Resource for Democracy in Western Europe is a fascinating read for those interested in political science and European studies.