- Opera Houses on Main Street, Where Art and Community Meet 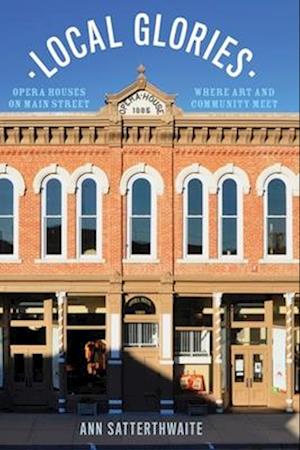 Opera houses were everywhere. Many towns had at least one opera house on Main Street by 1900. Hundreds of theater troupes, opera companies, individual performers, and many sundry entertainers then tred the boards of these halls as new rail lines could bring these troupers to previously isolated hamlets in new and old sections of the country. Five hundred troupes called "Tommers " performed only Uncle Tom's Cabin. Sarah Bernhardt, Mark Twain, and John PhilipSousa entertained thousands of townspeople as did innumerable minor league magicians, circuses, lecturers, and theater companies. At that time, more people saw live entertainment than at any other period making this the Golden Age for this distinctly American rural institution and the beginning of an era ofmass entertainmentThese halls, called "opera houses " to lend a touch of urban sophistication, were often the only large place for public assembly in a town. Aside from cultural events, they served as a public hall for local activities like school graduations, recitations, sports and town meetings, elections, and political rallies and even social dances and roller skating parties. Some were housed in town or city halls, but most were built by local entrepreneurs or committees interested in promoting the town aswell as attracting performers. Considered local landmarks, often in distinctive architect-designed buildings, they aroused considerable pride and reinforced town identity.These once-proud halls, however, succumbed in the early twentieth century as radio, movies, and later television and changing tastes made them seem obsolete. Some were demolished, but those that were abandoned to pigeons languished for decades until discovered in the last three decades by stalwart revivers in small towns across the county. The phoenix has indeed arisen.The resuscitation of these opera houses today reflects the timeless quest for cultural inspiration and for communal engagement to counter the anonymity of the virtual world. These revived halls are where "art and community " meet.