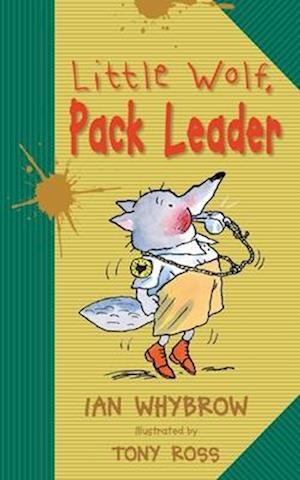 A fifth novel about this prize-winning wolfcub, illustrated by TONY ROSS. Mum and Dad write to Little Wolf, full of praise for Spoiler, the eldest cub of a neighbour, who has formed The Murkshire RHYWP [Really Harsh Young Wolf Pack]. Determined not to be forced to join their pack, Little and Chums form their own; The Beastshire SPOBBTALOF [Small Pack of Brute Beasts That Have a Load of Fun]. They all pull in different directions and Smells in particular is a pain. Without organisation or real purpose things get messy and they all get a bit snappish. Then comes news that the RHYWP have captured Mr Twister. Stung by this shaming blow, the SPOBBTHALOF elect Little as their pack leader and decide to shape up. Armed with pooled knowledge and camping skills they head off for Murkshire and set up camp. With the aid of a wickerwork Trojan Moose [with Normus inside] and nets, knots, latrine pits, an arksellent communication network, they re-capture Mister Twister for themselves. But in a suprise move, they release their arch-enemy into the wilds. Now Uncle Bigbad is a ghost, they realise that they need one wicked old villain, otherwise they would not have such great adventures.