- The Songs Behind Rock 'n' Roll's Most Famous Gigs 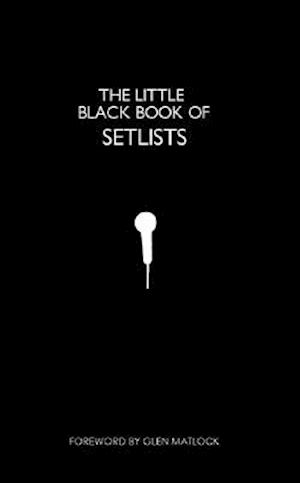 This fascinating, pocket reference guide passionately details 150 of rock and roll history's most famous setlists from the last fifty years of legendary music performances. From Billie Holiday's grand Flamingo Club gig in 1953, right through to the Rolling Stones biggest concert ever (and even Take That's reunion in 2006!), the "Little Black Book of Setlists" is the perfect dip-in guide for every obsessive music fan. This is the ultimate 'Were you there?' guide. If you weren't, these are the songs you would have missed! "The Setlist" has become part of rock and roll legend - a snapshot in time for your favourite artist, the songs they played and the shows they rocked. Many setlists tell the story of a band breaking up (sometimes while on stage!), a final tragic show, the first gig of a massive world tour, the biggest show ever, the strangest and even the deepest underground! For most though, legendary gigs, and their setlists, are remembered, simply, for their blistering rock and roll performances. Legendary setlists included within: the final Nirvana performance, the Last Waltz, the Rolling Stones at Altamont, classic Glastonbury shows, Jean Michel Jarre's Rendezvous Houston, Live 8, NME Poll Winner's gig in 1966, the Stone Roses legendary dire Reading Festival performance, Take That reunion, the Beatles rooftop gig and Joy Division's first ever gig. Plus many, many more. This title comes with a special, exclusive introduction by Sex Pistol songwriter and bassist - and pioneer of the Punk movement - Glen Matlock.