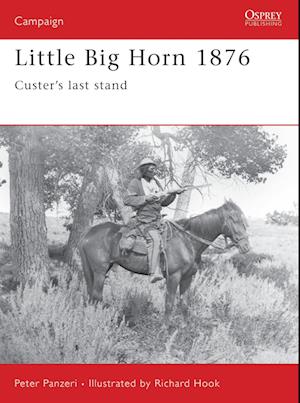 Osprey's examination of one of the most controversial battles of the American Indian Wars (1775-1918). The death of George Armstrong Custer, and over half of his 7th Cavalry Regiment in the valley of the Little Big Horn on 25 July 1876, has become the most celebrated battle of the Indian Wars. It was the greatest, and the last, victory of the Native Americans over the United States military. Disobeying orders, Custer followed a trail to a large encampment of Indians and, without determining the numbers he faced split his command into three groups and attacked. In the resulting chaos Custer and more than half the troops under his command were killed.

Forfattere
Bibliotekernes beskrivelse A concise account of the origins, events and outcome of the Battle of the Little Big Horn in 1876 - the most famous campaign of the Indian wars involving characters such as Sitting Bull and Crazy Horse, which resulted in the death of General Custer and over half of his 7th Cavalry. b&w photographs ; colour illustrations ; maps ; portraits ; facsimiles