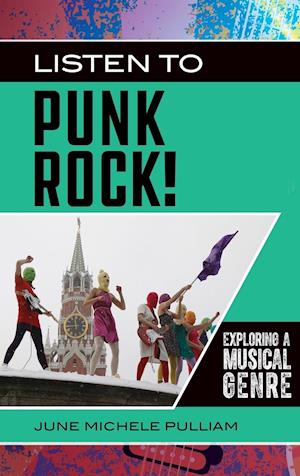 Listen to Punk Rock! Exploring a Musical Genre discusses the evolution of punk from its inception in 1975 to the present, delving into the lasting impact of the genre throughout society today.Listen to Punk Rock! provides readers with a fuller picture of punk rock as an inclusive genre with continuing relevance. Organized in a roughly chronological manner, it starts with an introduction that explains the musical and cultural forces that shaped the punk genre. Next, 50 entries cover important punk bands and subgenres, noting female punk bands as well as bands of color. The final part of the book discusses how punk has influenced other musical genres and popular culture. The book will give those new to the genre an overview of important bands and products related to the movement in music, including publications, fashion, and films about punk rock. Notably, it pays special attention to diversity within the genre, discussing bands often overlooked or mentioned only in passing in most histories of the movement, which focus mainly on The Sex Pistols, The Clash, and The Ramones as the pioneers of punk.Provides a thorough overview of the evolution of punk music from 1975 to the presentCovers bands composed of women and people of color that are frequently overlooked in other booksIntroduces readers to the breadth of the genre by including as many bands, musicians, and notable songs and albums as possible as entriesContextualizes punk music in the introduction to prime readers to explore entries in any order they choose