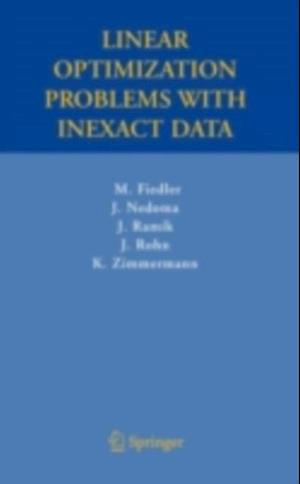 Linear programming attracted the interest of mathematicians during and after World War II when the first computers were constructed and methods for solving large linear programming problems were sought in connection with specific practical problems-for example, providing logistical support for the U.S. Armed Forces or modeling national economies. Early attempts to apply linear programming methods to solve practical problems failed to satisfy expectations. There were various reasons for the failure. One of them, which is the central topic of this book, was the inexactness of the data used to create the models. This phenomenon, inherent in most pratical problems, has been dealt with in several ways. At first, linear programming models used 'average' values of inherently vague coefficients, but the optimal solutions of these models were not always optimal for the original problem itself. Later researchers developed the stochastic linear programming approach, but this too has its limitations. Recently, interest has been given to linear programming problems with data given as intervals, convex sets and/or fuzzy sets. The individual results of these studies have been promising, but the literature has not presented a unified theory. Linear Optimization Problems with Inexact Data attempts to present a comprehensive treatment of linear optimization with inexact data, summarizing existing results and presenting new ones within a unifying framework.