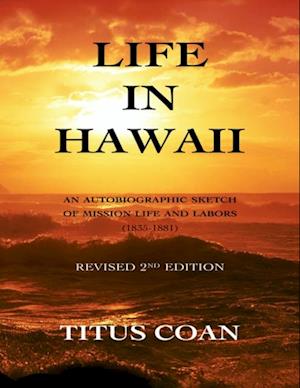 Life in Hawaii by Titus Coan. Includes: -- NCX Navigation. -- Interactive Table of Contents. -- Interactive Index. Life in Hawaii is a brief overview of the life and times of Titus Coan (1801-1882), an extraordinary man who lived during the early days of the colonization of Hawaii. In 1834, he sailed with his new wife to Hilo, where he was to remain and make his life's work for the next 48 years. After learning the Hawaiian language, Coan won the confidence of the Hawaiians and converted thousands to Christianity. He set up schools and provided medical assistance and comfort to a rapidly changing culture. Coan traveled extensively, at times with great peril, throughout his island home and later to the Marquesas Islands, and experienced first-time encounters with new lands and indigenous populations. Titus Coan also added a great deal to our knowledge of volcanic eruptions, and explored and recorded the volcanic activity on the island of Hawaii for decades.