Life in a Black Community 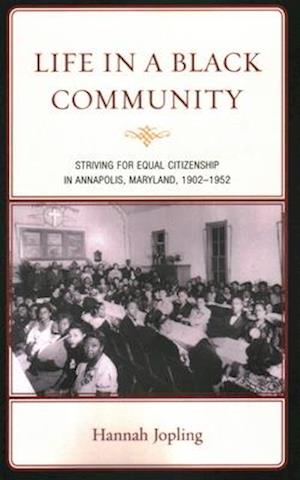 Life in a Black Community: Striving for Equal Citizenship in Annapolis, Maryland, 1902-1952 tells the story of a struggle over what it meant to be a citizen of a democracy. For blacks, membership in a democracy meant full and equal participation in the life of the town. For most whites, it meant the full participation of only its white citizens, based on the presumption that their black neighbors were less than equal citizens and had to be kept down. All the dramas of the Jim Crow era-lynching, the KKK, and disenfranchisement, but also black boycotts, petitioning for redress of grievances, lawsuits, and political activism-occurred in Annapolis. As they were challenging white prejudice and discrimination, tenacious black citizens advanced themselves and enriched their own world of churches, shops, clubs, and bars. It took grit for black families to survive. As they pressed on, life slowly improved-for some. Life in a Black Community recounts the tactics blacks used to gain equal rights, details the methods whites employed to deny or curtail their rights, and explores a range of survival and advancement strategies used by black families.