Liberty or Equality: The Challenge of Our Time 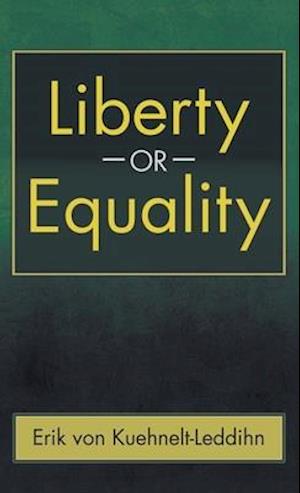 In Liberty or Equality, Erik von Kuehnelt-Leddihn first examines the historical and current meanings of both democracy and liberalism, demonstrating why the two do not necessarily coincide. He then puts forward a series of propositions, the first of which is that the impulse of democracy as popular government is the pursuit of equality, and that this leads unavoidably--and has in fact led--to collectivism and oppressive totalitarianism. He presents the apprehensions of thinkers and observers who lived between 1790 and 1914 and who, in true Platonic fashion, feared the rise of totalitarian tyranny in an evolutionary or dialectical process out of the very essence of democracy. Their views are then coordinated with those of our near-contemporaries, offering the reader a cogent study in the history of ideas. The second proposition is that monarchy is a more serviceable form of government than democracy, and is likely to be more liberal. Here the author deals with the weaknesses and inherent dangers of the democratic doctrine, which are avoided or mitigated in monarchical government. The final proposition is that the political temper of historically Catholic nations is more liberal than that of Protestant nations. While the political temper of our own times dictates a new servitude of enforced equality--even alongside the ideal of negative freedom--arbitrary equality, writes Kuehnelt-Leddihn, is a natural impossibility. Complete liberty is likewise an unnatural concept. While both are unnatural conceptions, there is a practical solution to this dilemma that has confounded human history. Hinted at by the author throughout, it involves both a retrieval of the best of Catholic political and social thought, as well as the observance of a tested and venerable program of action: in necessities unity; in doubtful things liberty; in everything charity.