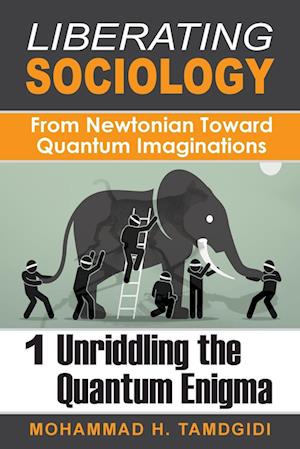 In this major new study in the sociology of scientific knowledge, social theorist Mohammad H. Tamdgidi reports having unriddled the so-called 'quantum enigma.'

This book opens the lid of the Schr dinger's Cat box of the 'quantum enigma' after decades and finds something both odd and familiar: Not only the cat is both alive and dead, it has morphed into an elephant in the room in whose interpretation Einstein, Bohr, Bohm, and others were each both right and wrong because the enigma has acquired both localized and spread-out features whose unriddling requires both physics and sociology amid both transdisciplinary and transcultural contexts. The book offers, in a transdisciplinary and transcultural sociology of self-knowledge framework, a relativistic interpretation to advance a liberating quantum sociology.

Deeper methodological grounding to further advance the sociological imagination requires investigating whether and how relativistic and quantum scientific revolutions can induce a liberating reinvention of sociology in favor of creative research and a just global society. This, however, necessarily leads us to confront an elephant in the room, the 'quantum enigma.'

In Unriddling the Quantum Enigma, the first volume of the series commonly titled Liberating Sociology: From Newtonian toward Quantum Imaginations, sociologist Mohammad H. Tamdgidi argues that unriddling the 'quantum enigma' depends on whether and how we succeed in dehabituating ourselves in favor of unified relativistic and quantum visions from the historically and ideologically inherited, classical Newtonian modes of imagining reality that have subconsciously persisted in the ways we have gone about posing and interpreting (or not) the enigma itself for more than a century. Once this veil is lifted and the enigma unriddled, he argues, it becomes possible to reinterpret the relativistic and quantum ways of imagining reality (including social reality) in terms of a unified, nonreductive, creative dialectic of part and whole that fosters quantum sociological imaginations, methods, theories, and practices favoring liberating and just social outcomes.

The essays in this volume develop a set of relativistic interpretive solutions to the quantum enigma. Following a survey of relevant studies, and an introduction to the transdisciplinary and transcultural sociology of self-knowledge framing the study, overviews of Newtonianism, relativity and quantum scientific revolutions, the quantum enigma, and its main interpretations to date are offered. They are followed by a study of the notion of the "wave-particle duality of light" and the various experiments associated with the quantum enigma in order to arrive at a relativistic interpretation of the enigma, one that is shown to be capable of critically cohering other offered interpretations. The book concludes with a heuristic presentation of the ontology, epistemology, and methodology of what Tamdgidi calls the creative dialectics of reality. The volume essays involve critical, comparative/integrative reflections on the relevant works of founding and contemporary scientists and scholars in the field.

This study is the first in the monograph series "Tayyebeh Series in East-West Research and Translation" of Human Architecture: Journal of the Sociology of Self-Knowledge (XIII, 2020), published by OKCIR: Omar Khayyam Center for Integrative Research in Utopia, Mysticism, and Science (Utopystics). OKCIR is dedicated to exploring, in a simultaneously world-historical and self-reflective framework, the human search for a just global society.