- Demonization and the End of Civil Debate in American Politics 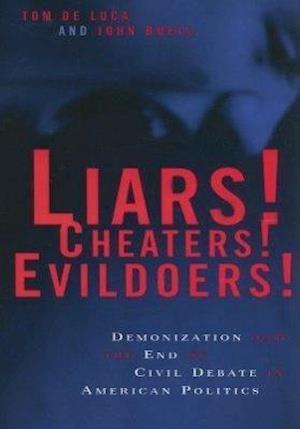 The level of vitriol in American politics has been rising with no end in sight. Terms like "evildoer," "war on terror," and "axis of evil" have become commonplace in our discussion of international politics. What ever happened to civil debate? Where has all this moralizing come from? And what harm has this new level of attack caused to democracy in America?

In this compelling and cogent account, Tom De Luca and John Buell chart the rise of what they rightly label as the "demonization"of American politics, showing how political campaigns often neglect debates over policy in favor of fights over the private character and personal lives of politicians. Political interests are still served by this style of politics, but democracy, the authors contend, is the loser. Covering everything from the Clinton impeachment to the war on terrorism to the 2004 presidential campaign, the authors show the distinctly American qualities of demonization and how their frequency and intensity has grown in the last four decades.

Suggesting that demonization is not inevitable or irreversible, this important book offers ways out of the political mudpit and back to a more civilized debate where democracy and freedom of speech can coexist in a productive, idea-rich environment.