Lenny, Lefty, and the Chancellor 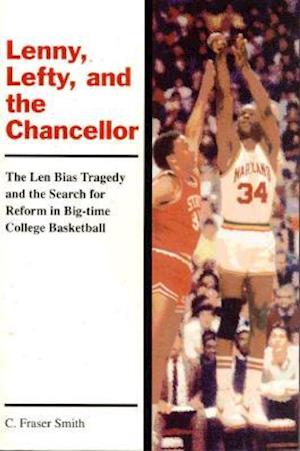 "Where were you on June 19, 1986?That s the day when Len Bias, one of the greats of the college basketball game, a player seemingly destined for NBA stardom, died of a cocaine overdose.For the next several months, millions followed the continuing, unfolding tragedy at the University of Maryland at College Park.Six years later, where is big-time basketball the big-money game whose vulnerabilities began to come to life with Bias s death?How far has it come in reforming itself against the abuses that contributed to the Bias tragedy?In ""Lenny, Lefty, and the Chancellor,"" Baltimore Sun reporter C. Fraser Smith answers those questions through the microcosm of the University of Maryland. He demonstrates how, despite numerous obstacles, the University of Maryland has been reforming its program during the five years since Bias s death actually transforming it from sinkhole to national model.In so doing, Smith provides the first book to look at the problems of intercollegiate sports from the college president s perspective a point of view crucial to getting balance instilled in such programs. ""From 1929, the year the Carnegie Commission issued its report on the subject, through 1991, when the Knight Commission released its report, every analyst has said that university presidents are the ones who must solve the problems of intercollegiate athletics,"" says Smith. ""My book, more than any available, carefully analyzes what presidents such as former UM Chancellor John Slaughter] have to work with, and what they are up against."" Reliance on the presidents, Smith concludes, ""is illusory and unrealistic.""In Lenny, Lefty, and the Chancellor, Smith gets at the central issues through three main characters each of them extraordinary and compelling. ""Clearly, Len Bias captured the imagination of the sporting world,"" says Smith. ""People still remember where they were when they heard the seemingly impossible news that Bias, just drafted the day before by the Boston Celtics, had died. Lefty Driesell, though now at James Madison University and thus somewhat out of the national spotlight, is vividly remembered by college basketball followers nationwide as a uniquely charismatic and successful coach. Chancellor John Slaughter, a black college president, is less well-known but just as interesting. His core experience as UM chancellor was built around a dead basketball superstar and a problem-plagued college basketball program, but his story is important well beyond that, because it delves into such important areas as race relations in America today.""Fully-textured and crisply written, sober yet gripping, Lenny, Lefty, and the Chancellor is a ""people and issue"" book that brings the problems of big-time college basketball down to the understandable level of the individual. ""That,"" says Smith, ""is something you can't get from a year s worth of reading dry texts and graduation statistics.""Though the book offers an insider s look at the University of Maryland, and at Maryland politics, it fits snugly into a larger and timely framework. With the Knight Commission refocusing attention on big-time basketball, the NCAA enacting new reforms pioneered at UM, and NCAA teams headed into another season, the lessons of the Len Bias tragedy at Maryland are important at the national level as well. ""University basketball,"" says Smith, ""permeates the American culture."""