Legal Identity, Race and Belonging in the Dominican Republic

- From Citizen to Foreigner 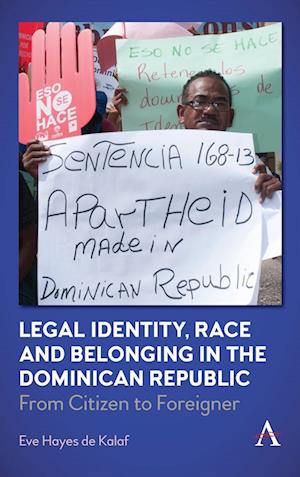 Legal identity is universal, transcending national and socioeconomic borders. It is a central tenet of the UN's 2030 SDGs and cuts across over 70 development indicators, including birth registration. Evidentiary proof of citizenship is now a necessary tool to ensure access to health, education and welfare services. As Laurence Chandy, director of Data, Research and Policy at the

UN Children's Fund (UNICEF), recently stated: the prioritisation of documentation within global policy, including the transition from paper to digital identity systems, is 'one of the most under-appreciated revolutions in international development'.

During a period of intense global political-economic reconfiguration, inter-governmental organisations, multi-lateral and national aid agencies have problematised under-documentation. They have contributed significant levels of financial and technical assistance to governments to improve civil registries and ensure that all citizens everywhere have their paperwork. Over this time, formal identification has come to be considered a 'prerequisite for development in the modern world' (Gelb and Clark, 2013). It is now essential to development strategy planning and assumed in both policy and practice to constitute a common good for all beneficiaries.

With a focus on the Caribbean, this book highlights how identification practices as promulgated by the World Bank, United Nations (UN) and the Inter-American Development Bank can force the thorny question of nationality, unsettling long-established identities and entitlements. Notably, the book is the first to identify tensions in social policy over the use of social protection mechanisms promoting legal identity measures with disputes over race, national identity and belonging. The book illustrates how, while keen to follow the World Bank's lead in promoting a legal identity for all - not least to continue benefiting from external funding and support - the Dominican Republic balked at pressure to recognise the national status of persons of Haitian ancestry. It used social policy programmes and international donor funding to trace and register the national origins of persons of non-Dominican ancestry. This culminated in the now notorious 2013 Constitutional Tribunal ruling that retroactively stripped tens of thousands of persons of Haitian descent of their Dominican citizenship. Significantly, these measures not only affected undocumented or stateless populations - persons living at the fringes of citizenship - but also had a major impact on documented citizens already in possession of a state-issued birth certificate, national identity card and/or passport as Dominicans.