Left in the Center 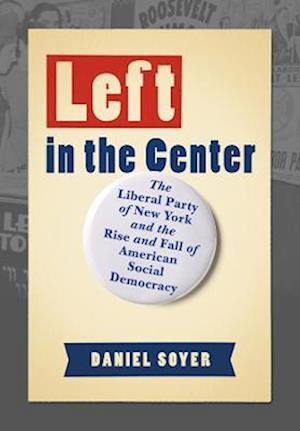 Daniel Soyer's history of the Liberal Party of New York State, Left in the Center, shows the surprising relationship between Democratic Socialism and mainstream American politics.Beginning in 1944 and lasting until 2002, the Liberal Party offered voters an ideological seal of approval and played the role of strategic kingmaker in the electoral politics of New York State. The party helped elect presidents, governors, senators, and mayors, and its platform reflected its founders' social democratic principles. In practical politics, the Liberal Party's power resided in its capacity to steer votes to preferred Democrats or Republicans with a reasonable chance of victory. This uneasy balance between principle and pragmatism, which ultimately proved impossible to maintain, is at the heart of the dramatic political story presented in Left in the Center.The Liberal Party, the longest-lived of New York's small parties, began as a means for anti-Communist social democrats to have an impact on the politics and policy of New York City, Albany, and Washington, DC. It provided a political voice for labor activists, independent liberals, and pragmatic social democrats. Although the party devolved into what some saw as a cynical patronage machine, it remained a model for third-party power and for New York's influential Conservative and, later, the Working Families parties.With an active period ranging from the successful senatorial career of Jacob Javits to the mayoralties of John Lindsay and Rudy Giuliani, the Liberal Party effectively shaped the politics and policy of New York. The practical gains and political cost of that complicated trade-off is at the heart of Left in the Center.