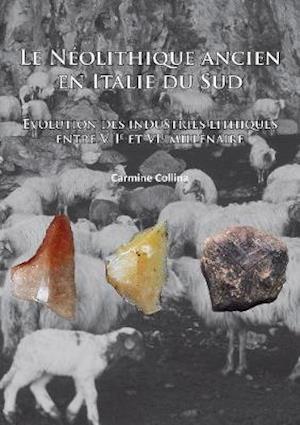 The principal aim of this study is to put forward a technological and typological analysis of the industries of the Early Neolithic concerned in the process of neolithisation in several regions of Southern Italy. The rooting concepts are centred on the principles of the lithic technology outlined by J. Tixier, H. Roche, and M.-L. Inizan, D. Binder, C. Perles, N. Pigeot et J. Pelegrin. The lithic series examined belong to the different horizons concerned in the process of Neolithitisation of Southern Italy in several areas of the envisaged region. In a view to reconstruct the economy of debitage and the economy of raw materials and the possible formation of technical traditions, this research is based on the following points: the economic and petrographic analysis of the raw materials; the analysis of the technological aspects and of the technical facts; the typometrical analysis of the different products of the chaines operatoires; the typological analysis through the creation of an inventory allowing to integrate the study of the technological criteria with that of specific characters of the lithic tools. The main targets of this research are to highlight the methods and the techniques of debitage and to identify the chaines operatoires set up by the early groups of farmers in the South of Italy and in Sicily. Is it possible to recognize a techno-economic variability in the debitage systems of the Early Neolithic of Southern Italy? Is it possible to give a cultural value to the variability of technical facts? What is the rate of continuity and discontinuity among groups of hunters-gatherers and the first farming societies? These questions shed light on the whole of technical and cultural transformations between the seventh and sixth millennium B.C. in the South of Italy, a region that played a key role in the process of diffusion of Neolithic towards the West Mediterranean.

Forfattere
Bibliotekernes beskrivelse The principal aim of this study is to put forward a technological and typological analysis of the industries of the Early Neolithic concerned in the process of neolithisation in several regions of Southern Italy. Illustrated throughout in black & white