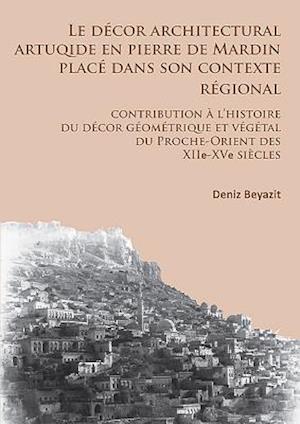 The Artuqids were one of the successor dynasties that rose to power in the aftermath of the eleventh-twelfth century invasion of Western and Central Asia by the Seljuq Turks. While the political power of the Artuqids was limited to the Diyar Bakr, a small region in northern Jazira corresponding to Southeastern Turkey, their artistic legacy is noteworthy. The many surviving Artuqid monuments, built over three hundred years (early 12th - early 15th century), and their decoration exemplify the mastery of stone carving which is reflected in intricate designs and motifs. Mardin, alongside other Artuqid centers such as Amid, Mayyafariqin and Hisn Kayfa, was set within a larger zone of diverse Christian and Islamic artistic traditions.This book defines Mardin's artistic context in relation to the other Artuqid centers, as well as the neighboring zones that encompass Anatolia, the Caucasus, Iran, Iraq, Syria and Egypt. During the Artuqid period an original style developed in Mardin and the Diyar Bakr, which itself was rooted in a well-established local school of stone carving. Connected with Christian traditions found in the Syriac Tur 'Abdin and in Late Antique Syria, the decoration also compares with that of monuments in Armenia and Georgia, and resonates with artistic practices seen in areas controlled by the regional Muslim powers of the time: the Zangids, Ayyubids, Mameluks, Great and Anatolian Seljuqs and the Ilkhanids. The Artuqid buildings reflect the spirit of the time, when the Jazira served as an artistic platform, fostering the circulation of ideas that led to new inspiration, and open-minded rulers and patrons, curious and receptive to new creations, stimulated the creative efforts of architects, stone carvers and craftsmen. The decorated monuments also attest to the existence of significant economic wealth and the need to commission sophisticated buildings that magnified the political and social status of the ruling elite's.

Forfattere
Bibliotekernes beskrivelse This volume studies the architecture of the city of Mardin in South-east Anatolia produced under the patronage of the Artuqids, whose influence held sway from c. 1101-1409. Illustrated throughout with 302 colour plates