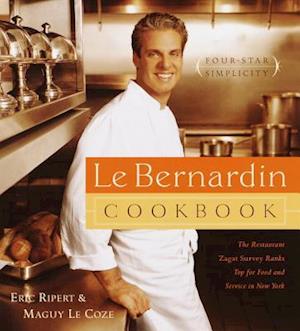 Cusine from New York's four-star seafood restaurant, Le Bernardin, is made accessible to everyone in more than 100 meticulously formulated and carefully tested recipes for all courses, from appetizers through dessert, in this cookbook from Le Bernardin chef Eric Ripert and owner Maguy Le Coze. The food served in Le Bernardin's beautiful dining room is as subtle and refined as any in the world, and because fish and shellfish are often best turned out quickly and simply, the recipes in this book can be reproduced by any home cook. Maguy Le Coze traces the origins of Le Bernardin's "simplicity" to her late brother, Gilbert, the restaurant's legendary cofounder and first chef. Today, Chef Eric Ripert carries on Gilbert's simplistic tradition with dishes such as Poached Halibut on Marinated Vegetables, Pan-Roasted Grouper with Wild Mushrooms and Artichokes, and Grilled Salmon with Mushroom Vinaigrette. And, of course, there are the desserts for which Le Bernardin is also so well known--from Chocolate Millefeuille to Honeyed Pear and Almond Cream Tarts. Essential to the experience of dining at Le Bernardin and to the Le Bernardin Cookbook are the dynamic and charming personalities of Maguy Le Coze and Eric Ripert, whose lively dialogue and colorful anecdotes shine from these pages as brightly as the recipes themselves.

Forfattere
Bibliotekernes beskrivelse The understated elegance of New York's only four-star seafood restaurant is now made available to the home cook in more than 100 impeccable recipes. The subtle dishes served in Le Bernardin's beautiful dining room have all been tested and adapted for the home kitchen. 18 color photos.