Law and the Christian Tradition in Italy

- The Legacy of the Great Jurists

indgår i serie Law and Religion 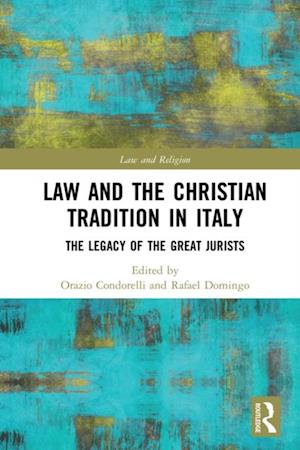 Firmly rooted on Roman and canon law, Italian legal culture has had an impressive influence on the civil law tradition from the Middle Ages to present day, and it is rightly regarded as 'the cradle of the European legal culture.' Along with Justinian's compilation, the US Constitution, and the French Civil Code, the Decretum of Master Gratian or the so-called Glossa ordinaria of Accursius are one of the few legal sources that have influenced the entire world for centuries.This volume explores a millennium-long story of law and religion in Italy through a series of twenty-six biographical chapters written by distinguished legal scholars and historians from Italy and around the world. The chapters range from the first Italian civilians and canonists, Irnerius and Gratian in the early twelfth century, to the leading architect of the Second Vatican Council, Pope Paul VI. Between these two bookends, this volume offers notable case studies of familiar civilians like Bartolo, Baldo, and Gentili and familiar canonists like Hostiensis, Panormitanus, and Gasparri but also a number of other jurists in the broadest sense who deserve much more attention especially outside of Italy. This diversity of international and methodological perspectives gives the volume its unique character.The book will be essential reading for academics working in the areas of Legal History, Law and Religion, and Constitutional Law and will appeal to scholars, lawyers, and students interested in the interplay between religion and law in the era of globalization.