Law and Love in Ovid

- Courting Justice in the Age of Augustus

indgår i serie Classics in Theory 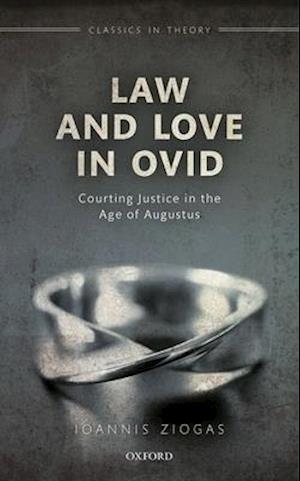 In classical scholarship, the presence of legal language in love poetry is commonly interpreted as absurd and incongruous. Ovid's legalisms have been described as frivolous, humorous, and ornamental. Law and Love in Ovid challenges this wide-spread, but ill-informed view. Legal discourse in Latin love poetry is not incidental, but fundamental. Inspired by recent work in the interdisciplinary field of law and literature, Ioannis Ziogas argues that the Romanelegiac poets point to love as the site of law's emergence.The Latin elegiac poets may say 'make love, not law', but in order to make love, they have to make law. Drawing on Agamben, Foucault, and Butler, Law and Love in Ovid explores the juridico-discursive nature of Ovid's love poetry, constructions of sovereignty, imperialism, authority, biopolitics, and the ways in which poetic diction has the force of law. The book is methodologically ambitious, combining legal theory with historically informed closed readings of numerous primary sources. Ziogas aims to restore Ovid to his rightful position in the history of legal humanism. The Roman poet draws on a long tradition that goes back to Hesiod and Solon, in which poetic justice is pitted against corrupt rulers. Ovid's amatory jurisprudence is examined vis-a-vis Paul's letter to the Romans. The juridical nature of Ovid's poetry lies at the heart of his reception in the Middle Ages, from Boccaccio's Decameron to Forcadel's Cupido iurisperitus. The current trendto simultaneously study and marginalize legal discourse in Ovid is a modern construction that Law and Love in Ovid aims to demolish.

Forfattere
Bibliotekernes beskrivelse Law and Love in Ovid challenges the view that legal language in poetry is a sign of frivolity and argues that it signals a radical return to the roots of law's creation.