- The Collection of the Israel Antiquities Authority 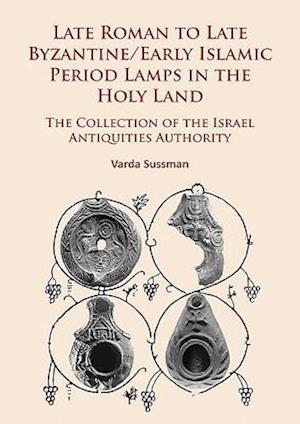 This volume illustrates lamps from the Byzantine period excavated in the Holy Land and demonstrates the extent of their development since the first enclosing/capturing of light (fire) within a portable man-made vessel. Lamps, which held important material and religious functions during daily life and the afterlife, played a large role in conveying art and cultural and political messages through the patterns chosen to decorate them. These cultural, or even more their religious affinities, were chosen to be delivered on lamps (not on other vessels) more than ever during the Byzantine period; these small portable objects were used to 'promote' beliefs like the 'press' of today. Each cultural group marked the artifacts / lamps with its symbols, proverbs from the Old and New Testaments, and this process throws light on the deep rivalry between them in this corner of the ancient world. The great variety of lamps dealt with in this volume, arranged according to their various regions of origin, emphasizes their diversity, and probably local workshop manufacture, and stands in contrast to such a small country without any physical geographic barriers to cross, only mental ones (and where one basket of lamps could satisfy the full needs of the local population). The lamps of the Byzantine period reflect the era and the struggle in the cradle of the formation of the four leading faiths and cultures: Judaism (the oldest), Samaritanism (derived from the Jewish faith), newly-born Christianity - all three successors to the existing former pagan culture - and the last, Islam, standing on a new threshold. Unlike during the former Greek and Roman periods of rule, the land of Israel during the Byzantine period did not really have a central government or authority. The variety of the oil lamps, their order and place of appearance during the Byzantine period can be described as a 'symphony played by a self-conducted orchestra, where new soloists rise and add a different motet, creating stormy music that expresses the rhythm of the era'. This volume, like the author's earlier books on this subject, is intended to create a basis for further study and evaluation of the endless aspects that lamps bring to light and which are beyond the capacity of any single scholar.

Forfattere
Bibliotekernes beskrivelse This volume illustrates lamps from the Byzantine period excavated in the Holy Land and demonstrates the extent of their development since the first enclosing/capturing of light (fire) within a portable man-made vessel. Highly illustrated throughout in black and white with 10 colour plates