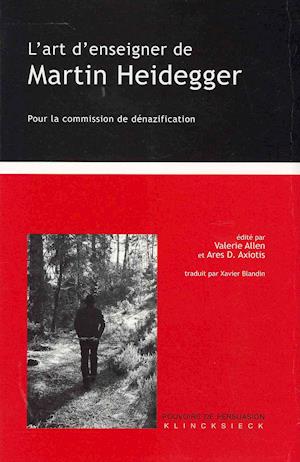 Imagine the transcript of the deposition of Martin Heidegger before the Committee on De-Nazification of Freiburg University in July 1945. Here would be a speech on a par with the apology of Socrates. At the beginning and at the end of metaphysics, the two greatest philosophers on trial--and, remarkably, on the same charges of impiety and corrupting youth, and by the same accusers, the powers of democracy restored. The alleged reactionary irrationalism of Heidegger's thought had purportedly led him to make the worse argument appear the stronger. This modern-day Socrates was indicted for the -impiety- of turning the free space of the academy into the platform of National Socialist ideology, and for -corrupting- German youth, by indoctrinating them with Nazi propaganda and inciting them to action. Consider Heidegger in extremis, defending himself on the basis of a view of the meaning of higher education and pedagogy in general as Greek paideia, irreducible to either of the two predominant educational alternatives characteristic of modernity, liberal education and professional training.