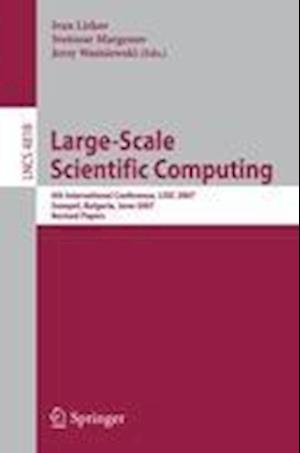 The 6th International Conference on Large-Scale Scienti?c Computations (LSSC 2007) was held in Sozopol, Bulgaria, June 5-9, 2007. The conference was organized by the Institute for Parallel Processing at the Bulgarian Academy of Sciences in cooperation with SIAM (Society for Industrial and Applied Ma- ematics). Partial support was also provided from project BIS-21++ funded by the European Commission in FP6 INCO via grant 016639/2005. The conference was devoted to the 60th anniversary of Richard E. Ewing. ProfessorEwingwasawardedthemedaloftheBulgarianAcademyofSciencesfor hiscontributionstotheBulgarianmathematicalcommunityandtotheAcademy ofSciences.Hiscareerspanned33years,primarilyinacademia,butalsoincluded industry. Since 1992 he worked at Texas A&M University being Dean of Science and Vice President of Research, as well as director of the Institute for Scienti?c Computation (ISC), which he founded in 1992. Professor Ewing is internati- ally well known with his contributions in applied mathematics, mathematical modeling, and large-scale scienti?c computations. He inspired a generation of researchers with creative enthusiasm for doing science on scienti?c compu- tions.The preparatorywork on this volume was almost done when the sad news came to us: Richard E. Ewing passed away on December 5, 2007 of an apparent heart attack while driving home from the o?ce.