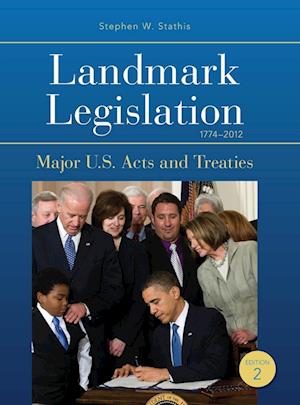 The Second Edition of this renowned treasure trove of information about the most important laws and treaties enacted by the U.S. Congress now deepens its historical coverage and examines an entire decade of new legislation. Landmark Legislation 1774-2012 includes additional acts and treaties chosen for their historical significance or their precedential importance for later areas of major federal legislative activity in the over 200 years since the convocation of the Continental Congress. Brand new chapters expand coverage to include the last five numbered Congresses (10 years of activity from 2003-2012), which has seen landmark legislation in the areas of health insurance and health care reform; financial regulatory reform; fiscal stimulus and the Temporary Asset Relief Program; federal support for stem cell research; reform of federal financial support for public schools and higher education; and much more.Features & Benefits:Each chapter covers one of the numbered Congresses with a historical essay, followed by the major acts of that Congress arranged in chronological order of passage - with each act summarized. A Finder's Guide summarizes all of the acts and treaties into approximately 40 separate topical policy areas. The work's extensive bibliography has been expanded and updated. This one-volume resource is a must-have for any public or academic library, especially those with strong American history or political science collections.