Lamson of the Gettysburg 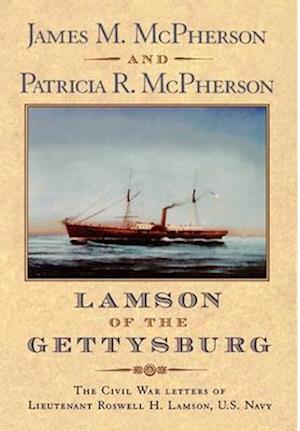 Roswell Lamson was one of the boldest and most skilful young officers in the Union navy. Second in the class of 1862 at Annapolis (he took his final exam while at sea during the war), he commanded more ships and flotillas than any other officer of his age or rank in the service, climaxed by his captaincy of the navy's fastest ship in 1864, USS Gettysburg. Now, in Lamson of the Gettysburg, we have the war-time letters of this striking naval figure.What's more, these are letters of exceptional quality. James M. McPherson, co-editor of the collection with his wife Patricia and one of America's pre-eminent Civil War historians, writes that "few sets of letters equal and none surpass those of Lamson for richness of description, scope of coverage, or keenness ofperception and analysis." Indeed, the McPhersons term Lamson's correspondence "the best Civil War navy letters we have ever read or expect to read". Throughout the war, Lamson always seemed to be where the action was on the South Atlantic coast, and these letters describe with striking immediacy the part he played in these events. While serving on the USS Wabash, for instance, he directed the big deck guns that did the most damage to enemy forts at Hatteras Inlet and Port Royal, two major naval victories. He was the officer who took command of the CSS Planter in May 1862, when slaves led by Robert Smalls ran her pastConfederate fortifications in Charleston harbour and delivered her to the Union fleet. He commanded a gunboat fleet on the Nansemond River that helped stop James Longstreet's advance on Norfolk. In a daring attempt to blow up Fort Fisher, the huge earthwork fortress that guarded the entrance into the Cape Fear river,he towed the USS Louisiana (packed with more than two hundred tons of gunpowder) directly under the guns of the fort, sneaking into the shallows behind a rebel blockade runner, (Lamson describes "a terrific explosion. An immense column of flame rose towards the sky, and four distinct reports like that of sharp heavy thunder were heard and a dense mass of smoke enveloped everything"). And a few weeks later, he led a contingent of seventy men from the Gettysburg as part of theJanuary 15, 1865 assault on the sea-face parapets of Fort Fisher, where he himself was wounded and his close friend, Samuel W. Preston, died. The letters also capture the spirited personality of Lamson himself, resolved to "stand by the Union as long as there is a plank afloat," but also deeply ambivalent about thewar. In a moving passage early in the collection, he describes leaving Annapolis for war duty on the USS Constitution (Old Ironsides): "We gave three cheers for Capt R., three for the troops, and for old friendship's sake three for those of our number who intending to resign [to join the Confederacy] were requested not to go on board. Some of my best friends were among them. This will be a sad sad war. It will be more painful to strike than to be struck." The publication of the letters of Roswell Lamson marks a major addition to Civil War literature. Featuring superb introductions to each section as well as informative notes that explain references in the correspondence to people, ships, land and sea battles, or homefront news, Lamson of The Gettysburg now joins the first rank of Civil War sources. One of the few accounts we have from the perspective of a navy officer, it is a book that everyone interested in the Civil War or inAmerican naval history will want to read.