LAMBERT'S TRAVELS THROUGH CANADA~and the United States of North America, in the years 1806, 1807, & 1808, to which are Added Biographical Notices and

indgår i serie Travel in America 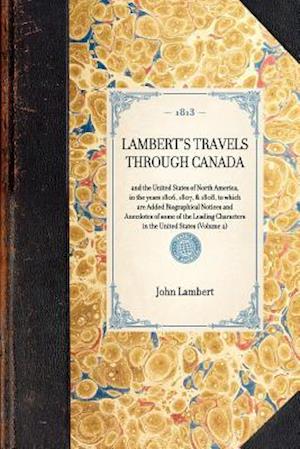 Somewhat mistitled, Lambert's Travels through Canada and the United States of North America, in the years 1806, 1807, & 1808, would more properly be titled ""Lambert's Travels along the East Coast of the United States, ending in Canada."" Beginning his travels in Savannah and Charleston, making note of his fellow travellers and the social environs, Lambert then travels up to Boston, where he comments at length upon the ""rigidity of the character"" among the original settlers. Among his descriptions of places and peoples, Lambert notes the differences in attitudes toward 'Negroes"" in the South and the North, as well as the differences in lifestyles and social mores. Providing social biography, as well as travelogue, Lambert provides biographical sketches and anecdotes about famous Americans, including Thomas Jefferson, James Madison, John Adams, Aaron Burr, and Thomas Paine, amongst others. Much attention is also given to the agriculture, commerce, economics, and politics of the United States. In the final chapter of the work, Lambert's journey takes him through New York, New Hampshire and Vermont, before he finally makes his way to Canada, ending his journey in Montreal. vol. 2 of 2